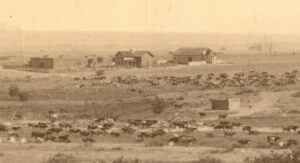 This chronology documents the history of  the Empire Ranch between 1879 and 1928.  During this time period the ranch grew from the original 160 acres purchased by Walter Lennox Vail  and Herbert R. Hislop in 1876  to over 100,000 acres.  The discovery of silver deposits on the northern pastures of the Empire Ranch in 1879 led to the development and operation of the Total Wreck Mine.  Between 1881 and 1887 the mine produced over $500,000 in revenue that allowed for the rapid expansion of the Empire Ranch through the purchase of more land, cattle, and other ranch improvements.  The information recounted comes primarily from letters written by Vail family members, newspaper accounts, and History of the Empire Ranch by Gregory Paul Dowell. Master’s Thesis, University of Arizona, 1978.