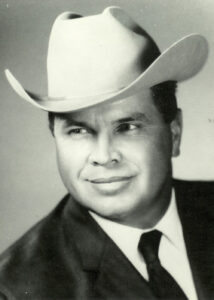 Pancho Boice was President of the Arizona Cattle Growers Association from 1970-1971.  When Pancho stepped down from that office he noted in his outgoing speech: “Though we may often feel like the old timer did when asked if he’d seen many changes in his lifetime. His response was ‘Yes sir, sonny and I was against every dang one of them.’  We cannot ignore the fact that changes are being made. We can influence those changes and we better speak up…” He concluded that “we must work to achieve results beneficial to all.”  [Adele Conover, A First Family—the Boices, 2006]

“Frank Boice, president of the Arizona Cattle Growers Association and operator of the 800-cow, 60-section Empire Ranch near Sonoita, said he was feeding his cattle a protein supplement. ‘The conditions are real dry and the grazing conditions are poor,’ he said. He said some shallow wells are pumping air part of the time. ‘I don’t know of anyone in our area who is hauling water yet,’ he said. ‘Most of the people depend on windmills. There’s talk among some of the ranchers . . . thinking about maybe doing something with the cows, selling or moving them’.” [Arizona Republic, 4/15/1971] 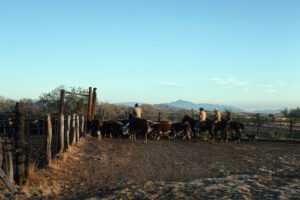 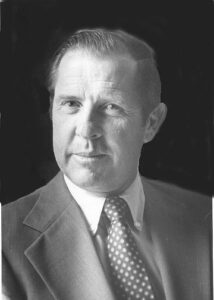 “Approximately 3000 acres of the Arivaca Ranch about 60 miles south of Tucson have been sold to Morton Freedman of Chicago one of the developers of 1900-acre Diamond Bell Ranch 23 miles west of Tucson. In addition Freedman has options to buy another 1900 acres of the ranch from Boice’s parents Mr. and Mrs. Henry G Boice of Tucson.”  [Tucson Citizen, 9/17/1971] 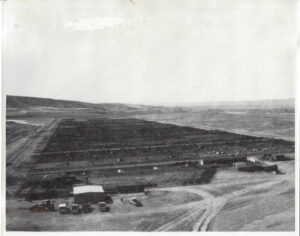 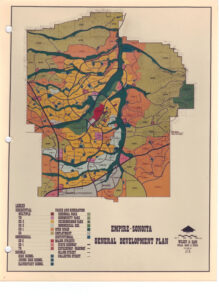 In mid-1970 Gulf American Corporation (GAC) began submitting Empire Ranch development plans to the Pima County Planning and Zoning Commission.  The first proposal called for “…58.266 residential units, which includes 1,000 acres of mobile home development. Planned density ranges from 3.4 homes per acre to one home per four acres. A total of 1,325 acres is for industrial use, which is east of Sonoita and south of Highway 82.” [Tucson Daily Citizen, 4/16/1970]

A swell of concerns about the project surfaced at the first meeting and the P&Z Commission delayed action until further information was provided including: “A title search of the Empire Ranch area to learn how much of the land is owned by GAC. A statement as to GACs future plans concerning the properties in the area that it does not own. A report from the Arizona Real Estate Commission concerning the method used by GAC to sell its lots. A position paper from the City of Tucson on the effect on the city’s water supply as a result of the new community. A report on the provisions made by GAC for utilities, treatment of surface runoff, schools and parks, governmental buildings and hospitals.” [Arizona Daily Star, 7/1/1970].

The concern about GAC’s methods for selling lots were prompted by its aggressive marketing efforts including:” Millions of vacation “tickets” to the Tucson-Nogales area are being distributed throughout the United States by GAC Properties of Arizona as part of a new sales promotion program … the tickets offer an opportunity for visitors to see the company’s Rio Rico development north of Nogales as well as its new project at Empire Ranch when it opens for land sales in early 1971.” [Arizona Daily Star, 6/5/1970]

In September the P&Z Commission “The Pima County Planning and Zoning Commission yesterday approved the GAC Properties, Inc., Empire Ranch area plan but added two unexpected reservations: –Present rezoning will be limited to a 5,300-acre area designed to accommodate 38,000 people, representing 9 per cent of the total 60,357 acres is the area plan and 21 per cent of the total projected population. Only after this area is “substantially” developed and a further “need” is shown, will the commission consider any more rezoning ‘ requests in the area.” [Arizona Daily Star, 9/30/1970] The next step was the Pima County Board of Supervisors meeting in December, where any action on the proposal was delayed. 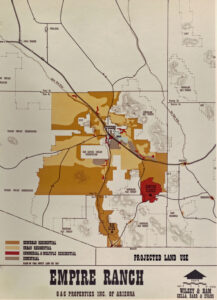 As GAC faced delays in permitting approvals in Pima County they developed a proposal to develop some of the Empire Ranch land in Santa Cruz County.  “GAC Properties Inc of Arizona’s ambitious plans to sell lots on its Empire ranch property received another setback this week — The Santa Cruz County Board of Supervisors Monday denied a request by GAC to rezone 1,100 acres of holdings in Santa Cruz for residential use. The property is part of GAC’s vast 60,000-acre Empire-Sonoita Area Plan which lies in Santa Cruz and Pima counties. The supervisors are asking assurance that there is sufficient water in the area to support a community the size GAC envisions. They were less than happy with the fact that all GAC did to prove the water supply was to drill three wells located said one ‘supervisor ’at least six miles from the area to be developed.’ The Santa Cruz board is altogether reasonable when it asks GAC to reveal in detail how it proposes to provide water for those who buy its lots ‘GAC is talking about piping the water We want to know whether they’re going to have reservoirs or storage tanks or what’ explained Board Chairman William J. Baffert. Another doubt about the project quite rightly plagues the supervisors. That is the sewer service. They take exception to GAC’s plan to use septic tanks as a sewerage system because the land is red clay and will not absorb sewage.” [Tucson Citizen, 3/18/1971]

The SCC Board eventually approved the proposal in October, with some reductions in the scope of the project. 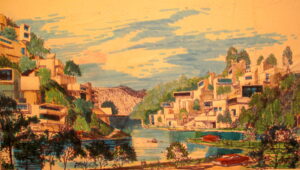 GAC Properties, Inc., of Arizona Is only a step away from starting its proposed 32,000-acre Empire Ranch satellite city in southern Pima County, according to Jim Dudley, the firm’s information director. ‘ After water, sewage and garbage disposal plans are cleared through the Arizona Health Department, the company plans to begin constructing the main road, Empire Ranch Boulevard, the utilities, a community recreation center and an 18-hole golf course. , Richard Bartholomew, outgoing director of the health department’s water supply division, said his division and the Water Pollution Control Division began checking GAC’s plans this week and expect to be completed in about two weeks. As of today, Jim Scanlan Is replacing Bartholomew. There has been no decision yet on when this construction will begin or when lot sales will begin.” [Arizona Daily Star, 9/1/1972] 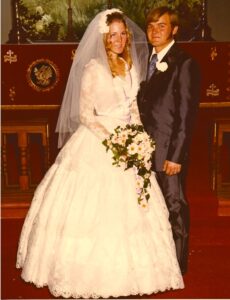 While Gulf American Corporation proceeding with the permitting process for their planned development of the Empire Ranch project Boice & Company continued ranching under the lease arrangement.  On November 4, 1972 Steve Boice, Pancho’s son, married  Annie Helmericks at St. Phillip’s in the Hills in Tucson.  Steve and Annie met in a chemistry class their freshman year at the University of Arizona.

They made their home in the main Ranch House at the Empire Ranch.  Steve took over management of the ranching operations, while Pancho concentrated on his other business interests.

“Frank Boice, a prominent rancher and former president of the Arizona Cattle Growers Assn., was found dead early Monday in the wreckage of his light plane near here. Bill Davis, association executive secretary, said employees of the Peabody Mine heard the plane late Sunday, realized it was in trouble and started looking. The wreckage was spotted before dawn Monday. The accident occurred 15 miles south of Tuba City at an area known as Perkins Mine.” [Arizona Daily Star, 11/20/1973]

Pancho was flying to the Colorado feedlots.  Pancho’s death was a devastating blow to the Boice family and Boice & Company. 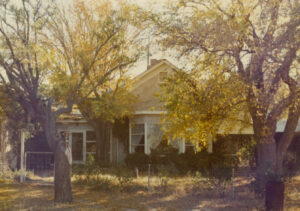 “The GAC Corp., whose stock price has been in a general decline for the past year, is trying to sell its undeveloped 35,000-acre Empire Ranch property near Sonoita, a huge tract the firm once planned to convert into a city of up to 180,000 people. George E. Buscher, president of GAC Properties of Arizona Inc., the national land development firm’s subsidiary in Arizona, said today that negotiations are in progress to sell the property 45 miles southeast of Tucson to ‘a very large’ company in the state. He declined to say exactly how much GAC is asking for the rolling grassland acreage, but said it. is substantially more than $10 million. The parent GAC company also is reported to be putting up for sale another 65,000 acres of undeveloped land outside Arizona and to be contemplating sale of its subsidiary GAC Finance Corp., the latter for more than $94 million.” [Tucson Citizen, 6/27/1973]

Steve Boice continued to manage the Empire ranching operations after the death of his father, Pancho.

“The purchase price of the Empire Ranch, sold nearly three weeks ago to the Anamax Mining Corp., was $12,808,000, according to a deed filed this week with the County Recorder’s Office. The ranch, of which 47,000 acres remain intact, dates back to the days of Spanish colonialism. GAC Properties of Arizona, Inc., the seller, bought 27,000 acres in 1969 from the Frank Boice family for $5 million and bought four other contiguous parcels since then. GAC once intended to develop a satellite city of 180,000 residents on the site, about 45 miles south of Tucson, but offered the property for sale a year ago, when, the company began experiencing financial difficulties. Anamax announced Dec. 12 that it had closed the deal with GAC but did not reveal the purchase price. Anamax officials have no immediate plans for developing the ranch, they say, and will continue to operate it as a cattle ranch. Anamax officials said the property may be used as a source of water for an intended copper mine in the Helvetia area, about three miles from the ranch boundary. The mine, if developed, would not be operational before 1980, Anamax officials have said. Boice and Co. holds a grazing permit on the property for 1,500 cows. The permit must be renewed annually under terms of an agreement between Anamax and Boice.” [Arizona Daily Star, 1/1/1975]