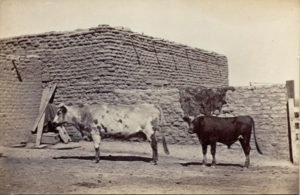 This chronology tells the story that led to the establishment of the Empire Ranch when Walter Lennox Vail (age 24) and Herbert R. Hislop (age 23) purchased a 160 acre homestead in Southeastern Arizona.  The information recounted comes primarily from letters written by both partners during the formative years of the Empire Ranch.

The Partners Meet and Prepare to Travel to Arizona (June-July 4, 1876)