The Partners Meet and Prepare to Travel to Arizona (June-July 4, 1876)

Virginia Flaccus, relates in her oral history with the Empire Ranch Foundation: “Grandfather, Edward Nye Fish, sent his brother-in-law, William Wakefield, out to homestead the Empire Ranch.  Far be it from Grandpa to bother about that!  Evidently Uncle Will did a lot of his footwork for him—a lot of mining and things like that, that Grandpa was interested in.  Grandpa would put up the money, and then Uncle Will would go out and do it.  And then after he had proven up on it, then Grandpa paid him off and he assumed ownership of the property. “ 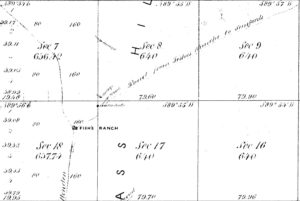 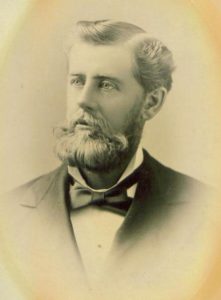 Walter Vail left the family home in Plainfield, New Jersey in mid-1875 to make his fortune in the American West.  His first stop was Virginia City, Nevada where he worked as a time keeper for a mine. On November 11, 1875 he wrote of his plans to go into the sheep business in Arizona: “I have heard so many different reports that I have decided to go and examine for myself.  A young man by the name of McCartney…is going with me.”

A month later (12/11/1875) Vail wrote: I just returned yesterday from a trip in the country. I went out with Mr. Fish to look at a ranch which belongs to Mr. F. and is about 50 miles south of Tucson, which brings it in the middle of a splendid grazing country which is covered with grass the whole season. Mr. Fish’s title only covers 160 acres but as he has all that water in his section of the country there is very little danger of anyone settling near there…  When Mr. Fish took up the ranch four years ago he expected to make it his home but was forced on account of the Indians to move back to Tucson.  Mr. Fish offered to sell his place for just what the improvements cost which is $3800 which would be cheap for the place if anyone was prepared to put 300 good Texas improved cows on it which would cost about $16 per head.  If McCartney had stayed with me in the cattle business we might have taken up enough land on water to feed 10,000 head of cattle… I think it will be better for me to go back to V1rg1nia City where I can make a living…”

Note that Fish was offering to sell property that was legally owned by Wakefield, supporting Fish’s granddaughter’s account of his business practices. 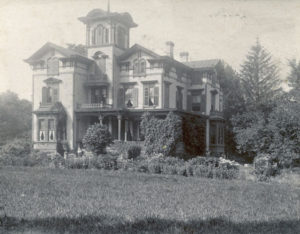 Herbert R. Hislop set out to make his fortune in the American West from England.   He had met Walter Vail’s uncle, Nathan Vail, in London and Nathan persuaded him to partner with Walter in a ranching venture in Arizona.   Herbert arrived in New York on May 23, 1876 aboard the ship “The Queen.”  In a letter (6/16/1876) to his sister Amy, he stated that he went “…through the custom house satisfactorily, though they stopped my gun and rifle and made me swear a lot of stuff about my having used it, etc.”

He stayed in the New York area for a fortnight seeing the sights and spending time with Nathan and his wife Anna Vail and with Walter’s brother Edward (Ned).  From New York City he traveled up the Hudson River to Albany.  After visiting Niagara Falls he traveled by train to Chicago where he waited for Nathan Vail.   They “…journeyed on together to San Francisco which took us exactly 5 days and 5 nights constant travelling, sleeping all the time on the Pullman sleeping cars.  You cannot form any idea what size America is until you begin to run on the railway which takes 7 days and 7 nights from New York to San Francisco.”

Walter Vail meets Herbert R. Hislop in San Francisco’s Lick House Hotel.  Writing (6/23/1876) to his fiancée Margaret Russell in New Jersey Walter provides his first impressions of his new partner:  “Hislop seems like a very pleasant  fellow,  he is decidedly English… it won’t take long to naturalize him I think.”

Hislop’s impression of Walter was also positive: “I met Walter Vail my partner who is a very nice fellow and seems to be very sharp and quick, knowing what he is about and I think we shall get on very well together, both having the same tastes and likings.” (Hislop letter 7/3/1876) 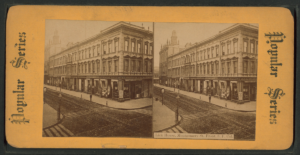 Hislop writes ( 7/3/1876): “You can go out every day without an umbrella for months and see a sky as perfect as a sky can be, there is always a delicious breeze from the bay,  the only disadvantage of this is that the sand blows about so and gets in your eyes. We took a trip from San Francisco to Cliff House about 7 or 8 miles and there we saw seals and sea lions in their natural state. There were hundreds if not thousands of them, the water was quite black with them and some were larger than a horse. The row they make is terrific, they had one wash ashore here one day and it weighed 3000 lbs so you can judge what is the size of them.”

At the Cliff House. Source: Library of Congress

Hislop writes ( 7/3/1876): “While in San Francisco we visited the Chinese quarter of the city where you might fancy you were in China. They conduct all their business and sell everything that they have in China, getting their goods direct. It is a very amusing part of the city to go through, as they sell such rum things and then do all their transactions so queerly.” 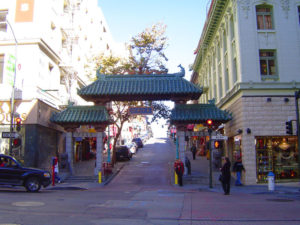 A Visit to Woodward’s Gardens

Walter wrote to his fiancée, Maggie (6/23/1876), that he Herbert, and Nathan Vail visited Woodward’s Gardens in the Mission District of San Francisco.  It was a combination zoo, museum and amusement park. 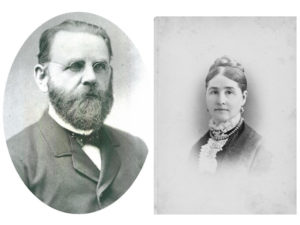 Nathan Randolph Vail (1825-1888) was Walter’s uncle, a younger brother of Walter’s father Mahlon. Early in his life he worked on a whaler and became a remarkable investor and developer. He met Herbert Hislop in London where Nathan was helping to install a street car system. Nathan and his wife Anna Walker Vail (1830-1913) were significant supporters of and investors in the Empire Ranch. Both hailed from New Jersey but settled in Los Angeles by 1880.

Hislop writes:  “From San Francisco we took steamer to Los Angeles which took us 3 days and 2 nights touching at Santa Barbara and San Luis Obispo and Santa Monica for Los Angeles.”   They probably traveled on a Pacific Coast Steamship Company vessel. 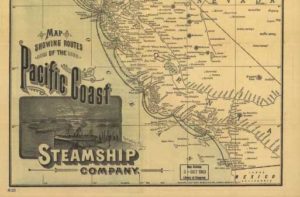 Aboard a Pacific Coast Steamship

Hislop writes about the voyage to Los Angeles:  “While at sea we saw seals and sea lions, a school of whales, some about 75 feet long which came pretty close to the steamer, and some flying fish. These are most peculiar things, having gauze wings like a dragon­-fly and sometimes fly a long way. I saw one fly 40 yards. It was about 1 1/2 pounds weight. The waters of the Pacific Ocean seem to abound in living things and living wonders to me. I had the pleasure of being seasick again.” 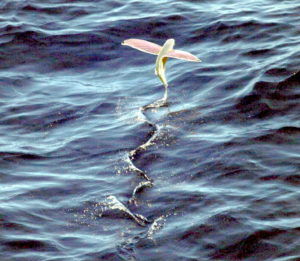 Hislop writes from the Pico House, Los Angeles (7/3/1876): “On board we met a very nice young Englishman, Captain Hutchinson, who has a ranch about 30 miles from Los Angeles. He introduced us to another Englishman, Freeman by name of Freeman…”

Vail writes: “Last Saturday (July 1st) Hislop and I were invited out in the country to a wolf hunt which was gotten up by an English gentleman a Mr. Freeman who is the owner of a very large ranch about ten miles from Los Angeles.  Hislop and I went out on horseback & we both took part in the hunt… we succeeded in getting up several wolves…”

Hislop writes about the wolf hunt: “ It is more exciting than fox or stag hunting I think, as there is the animal in its wildest state. They say they lose a good many lambs that are taken by these wolves.”

The ranch was most likely the Rancho Aguaje de la Centinela which Daniel Freeman leased in 1873 and later purchased.  The ranch house “the Centinela Adobe” is currently located in the Westchester/Inglewood area of Los Angeles, near Los Angeles International Airport.

Walter Vail and Herbert Hislop were in Los Angeles at a significant moment in American history—the centennial of Independence Day– July 4, 1876.  Many communities across the country planned 3 day celebrations (July 3-5).  In Los Angeles, a grand parade, with four divisions, was planned to begin at 9:30 a.m. at the intersection of 4th and 5th Streets and ending at Round House Gardens where the “literary exercises” of the day would take place.

The Los Angeles Herald included ads for several “Grand Balls” to be held the evening of July 4th sponsored by organizations like the Los Angeles Guard and Turn-Verein Germania (admission $1).  Other events included a “balloon ascension” by the people of El Monte.

Herbert Hislop and Walter Vail purchase stage tickets from Indian Wells (now Indio) California to Tucson Arizona.  Hislop describes the celebrating underway on 4th of July eve.  “They were letting off fireworks and firing anvils in the streets. The way they fire anvils is this, they bury one anvil in the ground, the bottom side upper­most and fill the little square hole with gunpowder, placing the other anvil on the top and then with a red hot iron about 12 feet in length set fire to the gunpowder and the explosion is just like a huge cannon going off, quite deafening to be anywhere near at the time.”

Hislop recounts the 4th of July celebrations in Los Angeles.  “At about 10 a.m. a grand procession was paraded through the streets to celebrate Independence Day and this year being the Centennial of course there was a grander procession than usual. The first part was very tame but soon the scene was enlivened by the appearance of the fire-brigade and their red and blue jerseys. The engines were drawn by 6 horses each pair having a suit of clothing of red, white and blue calico and the engines all decorated with flowers. Then came the fire-escapes and hose-carts drawn by about 30 men each. They never use horses to the last mentioned. After these came a lot of girls in wagons dressed like fairies to represent the different states and then came advertisements of people in business… In the evening there was a fire…The engines were very soon on the spot and then came the hose and fire-escapes drawn by a number of men, the mob all helping. They soon put it out and then went to finish the 4th July in the drinking saloons.” 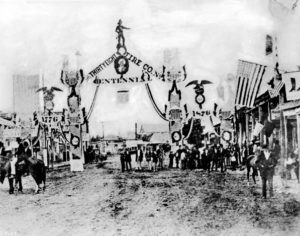