On July 5, 1876 Walter Vail and Herbert Hislop began an arduous trip from Los Angeles to Tucson.  The tale told below comes mostly from Hislop’s August 7, 1876 letter to his grandmother, published in An Englishman’s Arizona. The Ranching Letters of Herbert R. Hislop,  1876-1878. Tucson: Overland Press, 1965.  Walter Vail had made the trip once before, in 1875.  He began to write of his experiences towards the end of the trip.

Walter L. Vail and his partner, Herbert R. Hislop, leave Los Angeles for Tucson.  Hislop writes, “Left Los Angeles for Tucson at 2:30 p.m. having girded on our revolvers and belts. We arrived at the end of the railroad at 11 p.m.  At 10 p.m. we had to stop the train to clear the line as we were caught in a sandstorm which blocked the line like snow.”

The end of the line was Indian Wells, now Indio, California.  The Southern Pacific Railroad began operating to Indian Wells on May 29, 1876.

Vail and Hislop’s trip to Tucson continues via stage coach.  They followed the “Bradshaw Trail” through California.

Hislop writes: “Started in the stage coach with 6 horses at 20 to 1 a.m., travelling all night. When daylight broke you never saw such pictures as we looked, what with the heat and dust. The man that was opposite me at night, when I saw him in the morning I could not believe it was the same man. He looked so strange with the dust all over his clothes and face to the thickness of a penny.

Changed horses for the first time at 8:30 a.m., not getting breakfast till 12:30 p.m. Then changed again at Canon Springs [Canyon Springs] still on the Desert where we had an accident which might have been very serious. We had 6 horses that were half broken and when the driver wanted them to start they began bucking… and bolted away, the reins breaking. I never heard any man swear like the driver did. I really thought he had gone mad as he kept it up so long.”

Map of the Bradshaw Trail. Source: Bureau of Land Management

Arrived at Chuckawalli  [Chuckawalla Spring/Well] at 4 a.m. where we break­fasted off bacon and beans and had coffee, price 4/-. Here we saw lots of varieties of cactus and got some of the fruit which is just like a dried fig and very good. It seems to be the only thing growing on the Mohave Desert, some of them are as high as 40 feet and more. 8:10 a.m. again changed horses and passed some dead horses that had given out on the Desert and left there to die. The dust was very bad again, it being alkali dust parched one so. Reached the Colorado River at 5 p.m. but had to wait a long time till they ferried us across, which they did after we had fired off revolvers and blown bugles. It took us over an hour to cross and the river is only about 50 yards wide, but the stream is so very swift that they have to be very careful and the little boat, only fit for 4 persons, had over 14 besides baggage.” 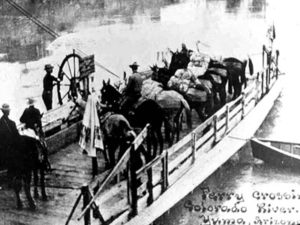 Hislop writes: “Started at 12 a.m. from Wickenberg (most likely he was in Ehrenberg, first stop in AZ after crossing the Colorado River), then having arrived in Arizona Territory. Here we had a drunken driver who had got a scratch team, having lost his while letting them out to water… We had 4 greys and one rejoiced in the name of Bones and well it deserved it. I never saw such a specimen anywhere. Whenever we came to sand or hills Bones would begin to kick and gib, always managing to get caught in the harness, and the way he used to feel round with his hind leg for you was grand to watch. He was always getting the cross-bars and traces mixed up.  I never saw such an obstinate brute. When we arrived at Tyson Wells for breakfast, we were delayed again and had to change drivers,a s the other was not fit to go farther. …during the night my nose bled. I supposed it was caused by the alkali dust and heat of the desert, as the thermometer was over 100° in the shade and had been 113° where we were. Even with a shirt on the perspiration ran off you like water.” 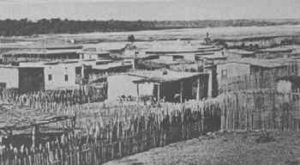 Hislop writes: “Nothing particular happened except my nose bled again and we still were enjoying the beautiful desert ride. I now know what a desert is having to drive 45 miles at a stretch without water, carrying 24 gallons with us for the horses on the road, we all had to fill our canteens with putrid water or else die from thirst, sometimes it was full of mud.”

The stage would have traveled from Ehrenberg to Tyson Wells (modern day Quartzsite) and from there to Wickenberg where the stage road forked, going north to Prescott and south to Phoenix. 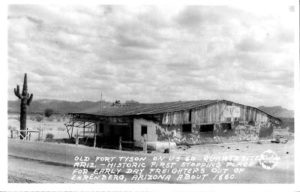 Hislop writes: “Breakfasted at Desert Station, 5 a.m., and then started for Phoenix, reaching it at 11:30 a.m., this being the first signs of cultivation we had seen since we left Los Angeles.  My poor nose bled again. Left Phoenix at 12:30 p.m. for Florence with only a pair of horses which had to travel 65 miles with only one feed, and that we stopped for in the desert at 7 p.m. to 9 p.m., when we took supper, oysters, biscuits, canned meats, melons, etc., as there was no house for 30 odd miles. After supper curled up in blanket and slept again, as one had to sleep when and where they could or else get none at all. One horse seemed rather bad here. It would have been awkward for us if it had given out as we should have had to walk 30 odd miles before reaching Florence. Slept a little in the stage as there was not quite so rough a road.” 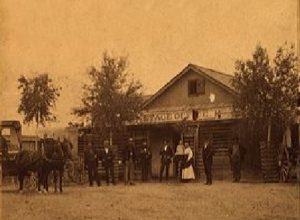 Hislop writes: “Arrived at Florence at 4:30 a.m. and had breakfast in hotel at 6 a.m. The hotel, like all the other houses, is built of mud, there being no bedrooms, people sleeping out of doors and under trees wrapped in their blankets.  We were obliged to stay here a day and a night as we missed the other stage that connected at Florence for Tucson.”

Vail writes: “It is very aggravating to have to wait here in this place, as there are no accommodations here.  Hislop slept in an old school house with a young fellow I met in Tucson and I slept under a tree.  The country around here is much better than I expected to find it they have plenty of water for irrigation and the crops look very well and there seems to be a good excitement about the mines which seem to be paying well.  I see by the paper that Fish has advertised everything for sale in Tucson and amongst other things his ranch, the sale comes off the latter part of this month.” 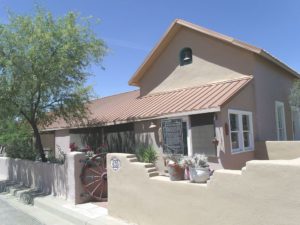 Hislop writes: “Got up or at least rolled out of my blanket at 5:30 a.m. and went and bathed in a pool about a mile from Florence. I enjoyed this as it was the first time I had taken off my clothes and washed since the morning of July 5th. Washing is a luxury in this country. They have very little water here. I heard a man describe Arizona like this, he said; “Get a box of sand and in one corner put a thimbleful of water and in the other a horned toad and you have Arizona.”  Left Florence at 7 p.m. for Tucson having for travelling companions two Indian agents going to look after their reservations. One of them was a Dublin man and as jolly a fellow as I have met since leaving England.”

Hislop writes: “Breakfast at Desert Station at 5:30 a.m., the last place before arriving at Tucson, where we arrived at 12 m. which was our destination, 8000 miles odd from England and here we begin to look for a ranch which I am very glad of as it is tiring work doing nothing. The first thing I did was to have a good warm bath and hair cut as close as it could be done, as hair-cutting is a luxury I must dispense with soon. To be 8 days and nights in a wagon that they call mud-wagons here is enough for any man as you are very much cramped and cannot get good water or food which of course is trying to one’s constitution.”

Vail writes: “Arrived here today at 11 A. M. in good shape. Paid our respects to the Gov. who seemed very much pleased to see us, he was just reading a letter from you [Walter’s uncle Nathan Vail] when we called. We are going with Mr. Fish on Saturday, to look at his place, he has a good deal more stock on it than he had when I was here last [in 1875] and I doubtful whether we can do anything with it.”