Empire Ranch is Purchased and the Hard Work Begins

After exploring three ranches in the Tucson vicinity Walter L. Vail and Herbert Hislop decided to purchase Fish’s ranch, which they begin to call the Empire Ranch.  It is not clear who named the ranch.  The partners begin the hard work of completing the 4-room adobe building, stocking the ranch, and expanding its land holdings.

Transfer of Property from Edward N. Fish and Simon Silverburg to W.L. Vail and H.R.Hislop is recorded in Book 3, pages 551-554 in County of Pima, Recorder’s Office, Territory of Arizona.  Sale price: $2,000.

Vail writes to his brother Ned (8/23/1876):   “I have been busy all day making arrangements about getting supplies out to the ranch which is a pretty big job as we have a good many things to take out, and as there has been heavy rains and washed the roads away through what is called Davidson’s Canyon which is about 15 miles long it will probably be a pretty tedious job.”

Hislop writes (9/23/1876): “The ranch we own is the one I have called Fishes ranch in former letters and I believe I have described it there. Now we are at work to make it fit to live in and I shall be very glad when all is finished, but as I have a home now I feel more settled. The Governor of Arizona says he is glad we have located here, as he likes to see such men come into the country, and I believe that if we go on steadily we must make money, from all I have seen and heard it is the best business there is, stock raising, and the demand now is much greater than the supply. We shall perhaps be going into Mexico to buy cattle soon, as our ranch is only 60 miles away from the line.” 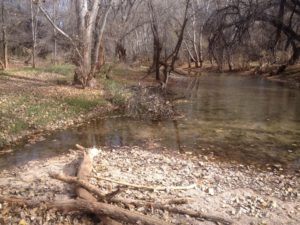 Cienega Creek in Davidson Canyon. This creek is one of the main water sources for the Empire Ranch and the City of Tucson. Source: Yelp

Vail writes to his fiancée Maggie (8/25/1876): “I have been running about in the hot sun until I’m completely tired out.  Mr. Hislop and I … have been busy all day with lawyers and storekeepers, as the place is 42 miles from Town we have to take enough provisions to last some time as we won’t like to take the trip any oftener than we can help.   I expect we will be kept pretty busy for some time as we have to fix up the house which has never been finished on the inside since it was built.  You would laugh to see Hislop making bread.  He can cook a great deal better than I can but he does look so comical running about with his sleeves rolled up he reminds me very much of Will Smith in some things. I had to buy a cooking stove this afternoon fore I only had to pay $75. I don’t know what it would cost in New York but I suppose $25 would be a big price.”

There is to be a grand feast in Tucson which will commence the 28th of this month and will last ten days.  It is a Catholic feast which is gotten up by the Mexicans, there are thousands here every year from Mexico who come on purpose to attend the feast and gamble.  I am in hopes we will get away from this place before the feast commences.“

The feast Vail refers to was the feast of Saint Augustine of Hippo.  The Arizona Citizen (8/26/1876) reported:  “Larger and better booth are erected than heretofore and the locality (military plaza in eastern suburbs) is deemed more pleasant than right in town.”  The next week the Citizen reported (9/2/1876): “Various opinions prevail as to the comparative success of the Feast of St. Augustine, now in progress.  The feast will be apt to continue till tomorrow evening–perhaps longer.  On Thursday evening there was a very interesting balloon ascension.  Everything goes on peaceably and orderly.” 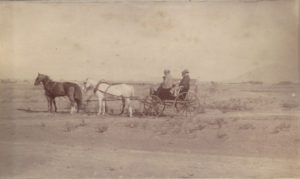 Hislop writes (9/23/1876): “We have got another ranch now and 620 sheep on it, we bought the man that owned them out. He was ill with fever and got disgusted so let us have them cheap. We gave him 4/-a head, that is cheap enough and they come in very handy to us as meat and when we can get 50 lbs. of meat for 4/-it is not so bad. I think we shall sell them soon for 9/-apiece so if we do, it will not be a bad trade. One day when I was baking my bread I had left the kitchen for a moment to do something and when I returned I caught a snake under the stove, it frightened me rather at first but we soon despatched him and sent him the way of all flesh. In our bedroom we have lizards and bats but we do not mind these, they are harmless. The country swarms with lizards and very pretty some of them are. The things I object to most are snakes but now they will soon lay up for the winter.”

The rancher who sold to Vail and Hislop was Henry Kemp who owned a quarter section (160 acres) east of the Empire, along Cienega Creek. 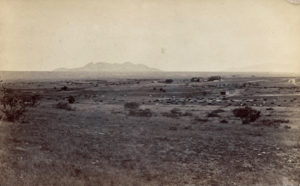 View of Empire Ranch from northwest, Mustang Mountains in the background, 1880s. ERF archives: A530-08

Hislop writes (9/23/1876): “The Indians are beginning to be a bit troublesome again here. Last week they killed two ranchmen about 20 miles from our ranch and have run off the horses and mules belonging to another ranchman close to us, that is 20 miles southeast of us. It is beginning to look serious again but I hope that as we are now settled they will not disturb us, there is safety in numbers. They are not the same Indians that you read of in the papers. Ours are the Apaches and the ones that are fighting in the Black Hills are Sioux and are about 500 miles from us, as our ranch is 60 miles from Mexico and the Black Hills are in Nebraska.”

Arizona Citizen (9/23/1876) reports:  “Upper San Pedro Valley, Sept. 16. Editor. Citizen : A sad calamity has fallen upon our valley. Mr. .J. C. Johnson can be added to the list of martyrs. He was killed by the Indians while at work on the road some twenty miles above the Upper Crossing. Calvin Mowrey is also missing and there is but little doubt he has shared the same fate. They had labored hard all Summer together and succeeded in raising a fine crop of corn with their faithful needle-guns constantly with them.”

“Mr. Sam Hughes came in from the Sonoita, San Rafael and Santa Cruz settlements on Wednesday, and reports that within six weeks over one hundred head of horses and mules have been stolen by Apaches, from the people, and quite a number of cattle killed. The Apaches kill a beef when they are in want of beef, and take what they need at the time and let the balance remain to spoil or be eaten by wild beasts. The settlers to the number of twenty-five, recently followed the trail of the stock and thieves, thinking first it might lead to San Carlos, but it led directly to New Mexico, and they followed it to east of the San Simon valley, near the New Mexican line, and were obliged to give up the chase without recovering any stock or punishing any Indians. They are much discouraged and if not afforded more adequate protection, will soon have to abandon their homes which they have so long been trying to make comfortable.” 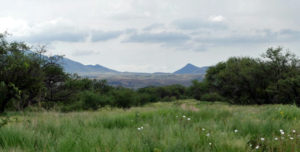 Hislop writes (9/23/1876): “I often think of the jolly times I used to have up the river and when I have done my day’s work (as we have made all the windows and doors and done all the carpentering to our house ourselves and saved $5 a day as that is what you have to pay a carpenter here) and sitting outside the house in the cool of the evening smoking my pipe I sometimes seem to have a longing to be there again, but when at work I feel all jolly and with a good horse under me and sport ahead what more can one wish. I am writing this letter in rather a hurry as I am going to drive into Tucson 50 miles away, in a day we always do it, and wish to write to let you know I have received your letter. I drive now in a different style, an old covered wagon with a pair of draught horses and cart harness, no groom behind in buttons, and my costume simply a shirt and trousers with a handkerchief round my neck.” 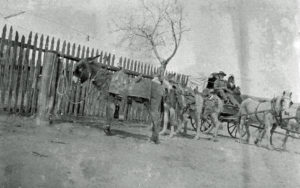 Sometime in October of 1876 John N. Harvey, age 23, an Englishman born in Bermuda, joined Vail and Hislop as a partner in the Empire Ranch venture.  His uncle had been a business partner of Walter’s uncle, Nathan Vail, and Harvey brought with him some badly needed cash to help expand the ranching operation.  The trio came to be known locally as the English Boys Outfit, despite the fact that Walter Vail hailed from New Jersey.  Hislop and Vail only mention this new partner in passing in their letters.

Hislop writes (10/22/1876): “At the time I am writing there is a company of soldiers on our ranch camping, in search of Indians. They are about 200 yds. from the house and I am all alone again, as my other two partners have gone to look at some corn fodder which we want for our horses during the winter, only the horses that we use for riding after the stock, which is pretty hard work on the horses sometimes and they could not do with what they could get on the ranch and work as well, so we have to get a little extra food for them in the shape of hay.”

Vail writes to his brother Ned Vail (10/24/1876): “I borrowed the amount of Harvey as I had no blank drafts at the Ranch and could not get them without going to town, I just told him that I want some things in New York and wanted a check drawn to your order for the $100 which he of course he gave me without asking any questions, I have not forgotten that I am and have been in your debt ever since I left home and as soon as I make something myself in Arizona I intend to settle up old scores.”