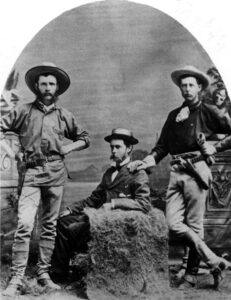 In May of 1879 Walter’s older brother, Edward Lang Vail, known as Ned, joined the Empire Ranch partnership.  He had no ranching experience but quickly learned.  The Empire Ranch herds were finally sufficiently developed for sale, and the Empire Ranch found a ready market in the town of Tombstone and its nearby mines.  Walter finally had sufficient funds to begin to pay off some of the loans from his Uncle Nathan and Aunt Anna.

North end of the original four rooms of the Empire Ranch House.

In 1880 the Southern Pacific Railroad finally reached Tucson and by April it was extended to Pantano,  north of the Empire Ranch.  The availability of rail transportation was a major boom to the Empire Ranch as it was now possible to sell cattle and beef to markets beyond Southern Arizona.  The railroad also increased the availability of goods in Tucson and allowed for much quicker and safer transportation to California and the East. 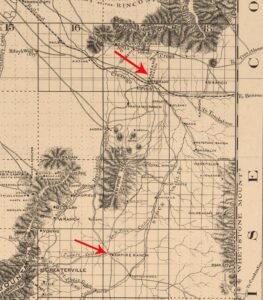 Section of Official Map of Pima County by Roskruge 1893.

The Total Wreck Mine Lawsuits—December 1880

Walter Vail, John Harvey, and John Dillon filed claims on several mines, including the Total Wreck, in 1879.  They paid two local prospectors, John Madden and Pat Sullivan to do exploratory work and maintain their claims.  When silver was discovered at the Total Wreck “several combinations of prospectors and lawyers petitioned the First District Court, in Tucson, to “quiet claim” in their favor on the Total Wreck property.

These initial legal actions, filed in December of 1880, precipitated rapid changes in both ownership and activity at the Total Wreck. In the course of the litigation, Dillon found that he could not meet his share of the legal expenses. He therefore deeded one-third share in the Total Wreck to their attorney Benjamin Morgan “in consideration of legal services,” and two months later sold another one-third of his share to Nathan Vail’s wife Anna. With Anna Vail as part—owner, Nathan Vail assumed a major role in managing the Total Wreck.”  All the lawsuits were eventually dismissed. [Source: History of the Empire Ranch by Gregory Paul Dowell. Master’s Thesis, University of Arizona, 1978.] 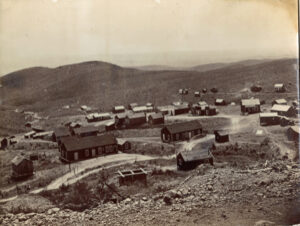 To obtain capital to develop the Total Wreck it was necessary to attract investors.  Nathan Vail was instrumental in the incorporation in the New York State of the Total Wreck Mining and Milling Company.  They were successful in obtaining investors for a little less than 50% of the stock.  The Vails maintained majority ownership of the stock. 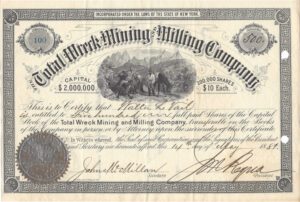 In 1881 Walter and John Harvey decided to marry.  Harvey traveled to England and on April 6, 1881 married 26-year-old Alice Maud Annand. The newlyweds arrived by ship in New York on May 12, 1881, and probably arrived in Arizona by train.

Walter Vail’s uncle Nathan was in Arizona in April and wrote to Walter about progress at the Total Wreck and on the Empire Ranch.  Nathan most likely made the trip to keep an eye on activities while John Harvey was in England and Walter was in New Jersey.  “Everything is going on smooth at the mine. I think the East-drift will be in far enough this week, from what Shaw says to think upon it, it is now running due north. The tunnel is extended 30 ft., and I think within ten days we will strike the load, as the rock is now much more broken up & less difficult to take out. The track iron & cars should be here this week and once down it will help very much as it takes 3 men and burros each shift & three can’t remove ore & rock as fast as it can be taken out. One man can put more ore down the shoot in a day than 4 windlass could hoist but when we have cars that will take 700 lbs. I think they will keep it clear…”

“Jack is busy with the branding.  Davis & Telez were with him when I left had brought the cattle from Babacomari and Crittenden the day before & I think were intending to gather from Tom Gardner & the Santa Ritas yesterday. I think the calves will generally be late. The group is poor and the cattle thin but I see some improvement lately.” 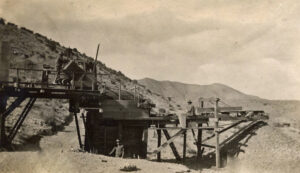 Walter and Maggie Get Married—June 1881 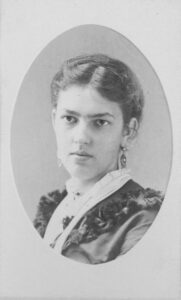 Walter married Margaret Newhall on June 15, 1881 at Holy Innocents Chapel in New Market, New Jersey.  Six weeks after their marriage Walter headed back to Arizona—the plans were for Maggie to come later. Walter wrote to her from New Mexico: “I expect you will be surprised to hear from me from this place. There has been a fearful wash out on the Railroad and the company brought us to this place and intend to transfer us across the mountains in carriages. The prospect is not a very pleasant one though much better than to remain here. I am very glad that you did not come as it would have been a fearful trip for you from this place on. A great many of the passengers are looking forward to the ride as a pleasant one, but if they all felt like I do about it and had seen as much of it they wouldn’t be so jubilant.”

When Walter returned from New Jersey he found that ranch life did not agree with Mrs. Harvey and that John Harvey was to leave the partnership.  He wrote to Maggie on August 5th: “I think Mrs. Harvey has been feeling a good deal as I expected she would and I am very much afraid she will not be happy in any place. I think both Harvey and she were glad to see me, and he looked more homesick than I ever saw him. I have bought his house and all the furniture so I don’t think we will require much when we commence keeping house. I also bought a very nice carriage today from Uncle Nathan which he had built for Aunt Anna for her use while in Arizona Territory so I think we will be pretty well fixed. I will telegraph from Tombstone tomorrow.”

Looking north across the military plaza in 1890 from 6th Ave & 14th St. in Tucson. 4 men in a horse-drawn carriage.

According to Vail family oral stories “when Margaret Newhall Vail arrived at the Empire Ranch for the first time Mrs. Harvey made every effort to welcome her to her new home. She prepared a special dinner for the occasion and made a gift of a small porcelain kitten to the new mistress of the household.  This tiny object is still saved and treasured in the family. The Harveys were to leave the ranch, but their kindness was long remembered, and the two families stayed in contact over the years. They returned to London, as did so many British who had invested successfully in the American west, but John Harvey eventually came back to California and the Calico mines.” [Source: Establishing an Arizona Family by Christine Shirley, 1977] 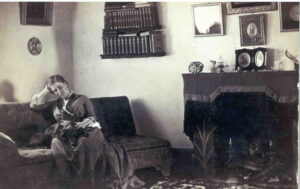 Starting in 1881 the land holdings of the Empire Ranch expanded considerably. They acquired Charles and Agnes Paige’s Happy Valley Ranch near the Rincon Mountains in 1881.  1882 saw the addition of Don Alonzo Sanford’s Stock Valley Ranch totaling over twenty-eight square miles of grassland between the Whetstone and Empire Mountains. 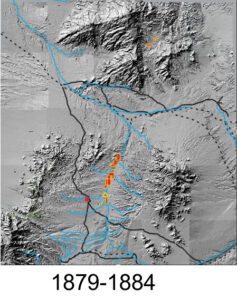 The Sanford ranch purchase was particularly important to the operation of the Total Wreck Mine, as  Ned Vail described in The Story of a Mine. “There is a Canyon that runs directly down from Total wreck Camp to the Cienega creek about two miles east. A powerfully geared pump was installed there, and a six-inch iron pipe laid to the top of a small hill Just east of the camp. Two fifty- thousand-gallon redwood tanks were built there, and a four-inch pipeline ran through the little town to the mill and furnished plenty of water.”

Ned Vail was sent to work with Sy White, superintendent of the Contention Mine at Tombstone and the mine’s chief assayer, Robert Wade, to learn all aspects of the trade. After six months of training he returned to become the Total Wreck Mine’s assayer. 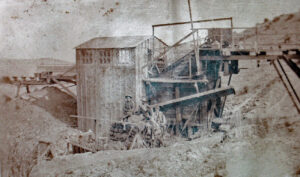