You are here: Home » Events » Western Movies at The Loft Cinema, Canceled

Each summer the Empire Ranch Foundation celebrates classic Western movies with a showing on the big screen at The Loft Cinema in Tucson.  The fundraiser event also includes knowledgeable presentations by guest speakers, with audience participation invited. 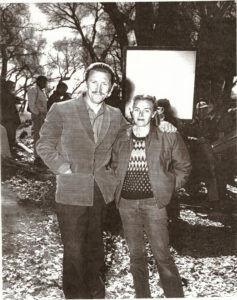 Kirk Douglas and Sherry Boice during the filming of Gunfight at the O.K. Corral

Burt Lancaster (Wyatt Earp) and Kirk Douglas (Doc Holliday) star in this classic western that was filmed in southeastern Arizona, including the Empire Ranch.  When Wyatt Earp joins his brothers in Tombstone they soon find themselves feuding with the Clantons, local ranches and reputed cattle thieves.  Noted gambler Doc Holliday has also moved to Tombstone and he joins up with the Earps in the famous shootout at the O.K. Corral.

The Empire Ranch Foundation greatly appreciates the support of   The Loft Cinema who sponsored the 2019 showing of Oklahoma!  The Western Movies at the Loft events support the preservation of the Historic Empire Ranch on Las Cienegas National Conservation Area in Sonoita.