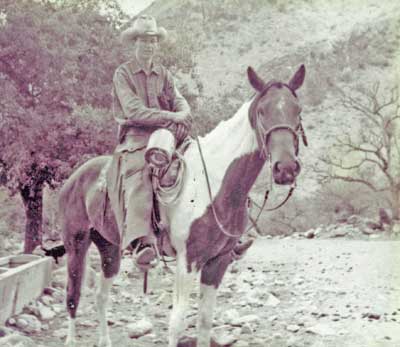 Austin Moss was born on December 9, 1923 in Oracle, Arizona. Orphaned at an early age he was raised by his grandmother and other family members in Tucson and New Mexico. At the age of 15 he was hired to maintain and repair windmills by rancher Bird Yoas on his ranch near Elephant Head. In 1944 worked for rancher Dink Parker in Gardner Canyon. After serving in the Navy during World War II he returned to work for Dink Parker for a short time and then returned to work for Bird Yoas. He married his wife Marka in 1948 and began to work for the Gill Cattle Company. Later that year he and Marka went to Mexico to participate in a U.S. government program to combat the hoof and mouth disease. Austin and Marka have seven children.

Mr. Moss always volunteered to shoe horses to earn extra money, and also worked with the young (half broke) horses. He participated in several Empire Ranch roundups which usually took about a month to complete. He notes that the Boice family all participated in the Roundups and could do anything that a working cowboy could do. He describes the social and working relationships between ranchers, and various community social events.

Date of Interview: May 31, 2007
Interviewer: Alison Bunting and Tom Rogos