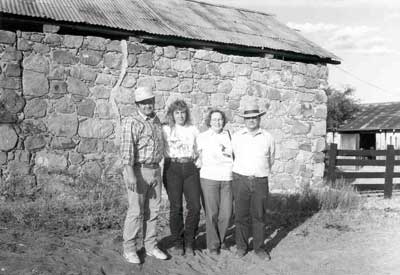 The Boice family owned the Empire Ranch from 1928-1969. They continued ranching on the Empire from 1969-1975 under a lease arrangement with Gulf American Corporation. This is a group interview with Bob Boice and his wife Miriam, and Steve Boice and Sherry Boice Buzzard. Bob grew up on the Empire Ranch and lived there until 1956. Steve Boice and Sherry Boice Buzzard, children of Bob’s brother Frank Stephen (Pancho) Boice also grew up on the Empire. The group describes the uses and characteristics of various ranch house rooms & features, such as swimming pool, wells, (primarily the period 1929-1955).