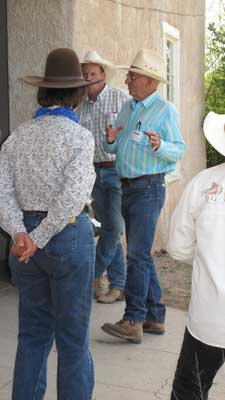 Gerald Korte worked and lived as a cowboy on the Empire Ranch for the Boice family from 1946-1949. (He was the first president of the Empire Ranch Foundation.) This interview discusses splitting up of the ranch among the Boice brothers and other sales of ranch property. After working on the Empire, Gerald worked for Jack Greenway on the Cienega Ranch, and on other ranches in other capacities, especially as an accountant. He describes changes in the Empire landscape, screw worm problems, and his recollections of the uses of the buildings and rooms at ranch headquarters.

Video of a tour of the Empire Ranch House conducted by Gerald Korte, with commentary on how rooms were used and memories of his life as a cowboy on the Empire (1946-1949).