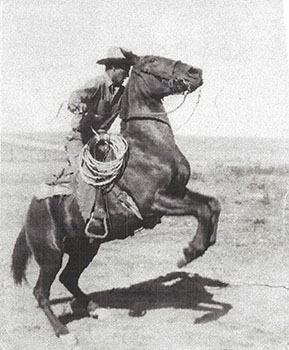 Henry Dojaquez is the son of Mike Dojaquez and Felicita Escalante Dojaquez. Felicita came to Helvetia, Arizona from Sonora Mexico in 1905. Mike came to work at the Empire Ranch in 1907 under the direction of Empire Ranch foreman Tom Turner. Mike had worked for Tom Turner when he was the foreman of the Greene Cattle Company, and followed him to the Empire Ranch. Henry’s uncles were ore haulers for the mines in the Patagonia/Sonoita area.

Henry worked at the Empire one spring in 1936. He worked the Roundup and helped build a dam on the Cienega Creek, working with Charlie Grantham, Mary Boice’s brother. Frank S. Boice designed the dam and worked with them. The dam was washed out in a flood in 1938. Henry recalls some of the men who worked on the Empire Ranch such as Fred Barnett, Jack Cooper, Dick Jimenez, Apache Joe, Blas Lopez, Ed Souter, Tom Turner. He also recalled stories of the Empire Ranch buildings being saved from fire by Fort Huachuca soldiers who were camped at the ranch. He describes the farming operations, raising corn and alfalfa, at the Empire Ranch, and the supplies that were kept in the commissary during the Vail era. Families that worked for the ranch received monthly allotments of sugar, flour, coffee, and fresh meat.

Henry was most familiar with Banning Vail, whom he calls “Bandy”, and Edward “Ned” Vail. He also recalls Frank S. Boice, who was a great engineer and Pancho, Bob, and Fred Boice. He relates stories of many of the families that lived in the Sonoita area and of his experiences with the Civilian Conservation Corps. He recalls many of the roads, water sources, mines, moonshine operations, and other activities in the area.