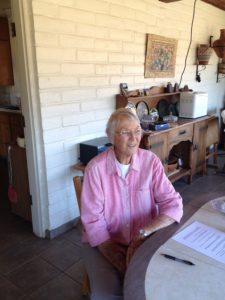 Jane Collie Woods was born in 1926 in Tucson, Arizona.  Her parents, Stone and Fern Collie arrived in the Elgin area in 1910 and 1912 respectively.  Jane and her sisters, Marka and Fern grew up on her parent’s ranch in Elgin and in Tucson.  Stone Collie operated a riding stable in Tucson in the 1930’s and returned to Elgin as a full-time rancher in 1937.  In addition to running cattle her parents operated a guest ranch.

Jane recalls her family’s interactions with the Empire Ranch.  They often stopped at the Empire Ranch for a meal when driving horses from Elgin to Tucson.  Her father, who was a talented carpenter, did the construction work on the Huachuca House when it was moved to the ranch in the early 1950s.  The Collie’s also looked after the Empire Ranch’s “Heart” pasture in Elgin.  Jane became involved in the Empire Ranch Foundation as an early board member at the request of John Donaldson.  She conducted a number of oral history interviews for the Foundation.