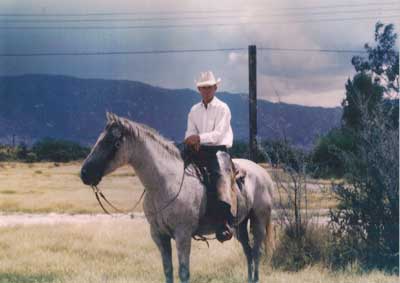 Jim Gilbert was born in Perrin, Texas, in 1927. His father was a school teacher and school principal. Mr. Gilbert moved to Arizona in 1939 and worked as a cowboy and rancher. He worked for several Arizona ranchers throughout his career, including the Babbitts in Flagstaff in 1948; breaking horses for Bill Turney in Sonoita; for nine years on John Nelson’s Rail X ranch in the Tortolitas; and on the Vistoso Ranch.

Mr. Gilbert participated in the Empire Ranch fall roundup in 1947. The foreman of the Empire was Fred Barnett; the cook was Charlie Brooks. He recalls the sale of portions of the Empire Ranch by the Boice family, including the Cienega Ranch to John Greenway and all land north of the railroad track.

Mr. Gilbert worked for Greyhound Bus Company for eleven years and also built custom homes in the Tucson area. He and his wife Josephine have lived on their Bar Y ranch east of Vail for thirty five years; he ranched for 28 of these years and his son now handles the ranching operations.