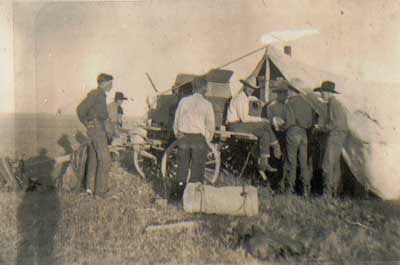 Interview Summary:  Jim Van Auken was an Arizona livestock inspector for southeastern Arizona from 1952 to 1983.  Born in 1921 in Leavenworth, KS, he grew up on the 41 Ranch in Wyoming which his father managed.  His family also ran a small guest ranch.  He attended high school in Buffalo, WY and enrolled in Notre Dame University in 1939.  The untimely death of his father that year caused him to return home to help support and care for his mother and his siblings.  During WWII he enlisted in the Navy and became an officer after receiving additional education at Minot State Teacher’s College and midshipman’s school in Chicago.

After the war he returned to Wyoming and worked a little ranch with his brother.  He came to Tucson in 1947 to work as a wrangler at the Diamond W guest ranch.  Hired as a livestock inspector in 1952, Jim describes the responsibilities of the job: clearing animals for sale by inspecting brands; supervising quarantines imposed by the state veterinarian; and dealing with the aftermath of vehicle accidents involving cattle/horses.  Livestock inspections would take place on individual ranches, at shipping locations, and in the sale barn in Tucson.  Jim became most closely involved with the Empire Ranch when John Donaldson had the ranching lease.  He had worked with John Donaldson at other ranches he owned.  Blaine Lewis, another inspector, worked closely with the Boices during their tenure on the ranch.