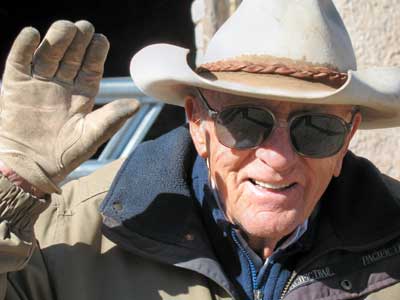 John Donaldson entered into a joint venture with Anamax Mining Company in 1975 to run cattle on the Empire Ranch after Anamax ended the Empire Ranch lease agreement with the Boice family. After an initial three day inspection of the ranch he saw some non-traditional range management opportunities, and made an experimental start by bringing seventeen head of cattle to the Empire in December 1975. Mr. Donaldson noted that acquisition of the Cienega Ranch by Anamax in 1977 provided country where the cattle could winter and resulted in three environments for cattle raising. These included a prairie with Sacaton grass at the south end of the ranch and around the Headquarters buildings; the Whetstone and Empire mountains for winter pastures; and the Sacaton delta and benches around the Cienega Creek. The Donaldsons developed a rotation system for cattle grazing over a 12-15 year period; they bred different types of cattle, such as Herefords to Brahman bulls.

Mr. Donaldson discusses the economics of ranching on the Empire, including the installation of additional fences, the development of wells, and the drought that began in the late 1990s. He covers the challenges of ranching on public lands including delays in the development of a grazing plan with the Bureau of Land Management, and the impact of public use of the Las Cienegas National Conservation Area where the Empire Ranch is located. He reviews his son Mac’s involvement in the ranching operations, noting that Mac Donaldson is a very proficient rancher, is more patient than his father, and works better with the public.

The interview ends with a brief review of John Donaldson’s early ranching experiences in Sonoita (1948), on the Tanque Verde Ranch (1948-1951), and on his Tortuga Ranch located about sixteen miles west of Tucson in Avra Valley.

John Donaldson entered into a joint venture with Anamax Mining Company in 1975 to run cattle on the Empire Ranch, He describes his business relationship with Anamax; his range management techniques, including mesquite removal; and the impact of the Empire Ranch lands coming under government ownership.