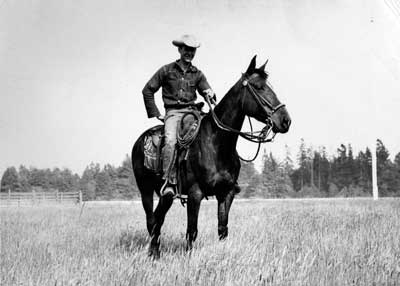 Norman Hinman worked as a cowhand for the Boice family for four months (May-August) in 1953. He describes his primary responsibilities as a cowboy (doctoring cattle for screwworms and ensuring that windmills were operating properly); shares his recollections of the room and building uses at Empire Ranch headquarters; and describes the construction of a cement water tank and trough in an Empire Ranch pasture.

Norman had finished one year of college in California when he decided to do some travelling. He had worked several years for the Russ Cattle Company in California and when he arrived in Tucson he placed a “work wanted” notice on a bulletin board in Tucson. Bob Boice responded to the notice and hired him. Norman worked primarily with David Corrales, the other hired hand, but also with Frank Sr., Pancho, Bob, and other family members depending on the job requirement. Norman was most impressed with the ranch operations, especially the ingenious water tanks and troughs designed and constructed by Frank S. Boice.

Sherry Boice encouraged Norman to return to college, and he did so, earning a bachelor of science degree in Biological Science and a bachelor of science degree in Animal Husbandry from California State Polytechnic College, and a master’s degree in Animal Nutrition from the University of Idaho. Then, after managing a small cattle ranch for the Russ Cattle Company in Northern California, he worked for 29 years in the animal nutrition research facility at the University of California, Davis, first as their feed lot herdsman and later as a laboratory technician.