The Empire Ranch Headquarters complex includes numerous buildings and structures. Many of the buildings are open for exploration by visitors. Read about the history of these structures below, with additional detail on the main Empire Ranch House. 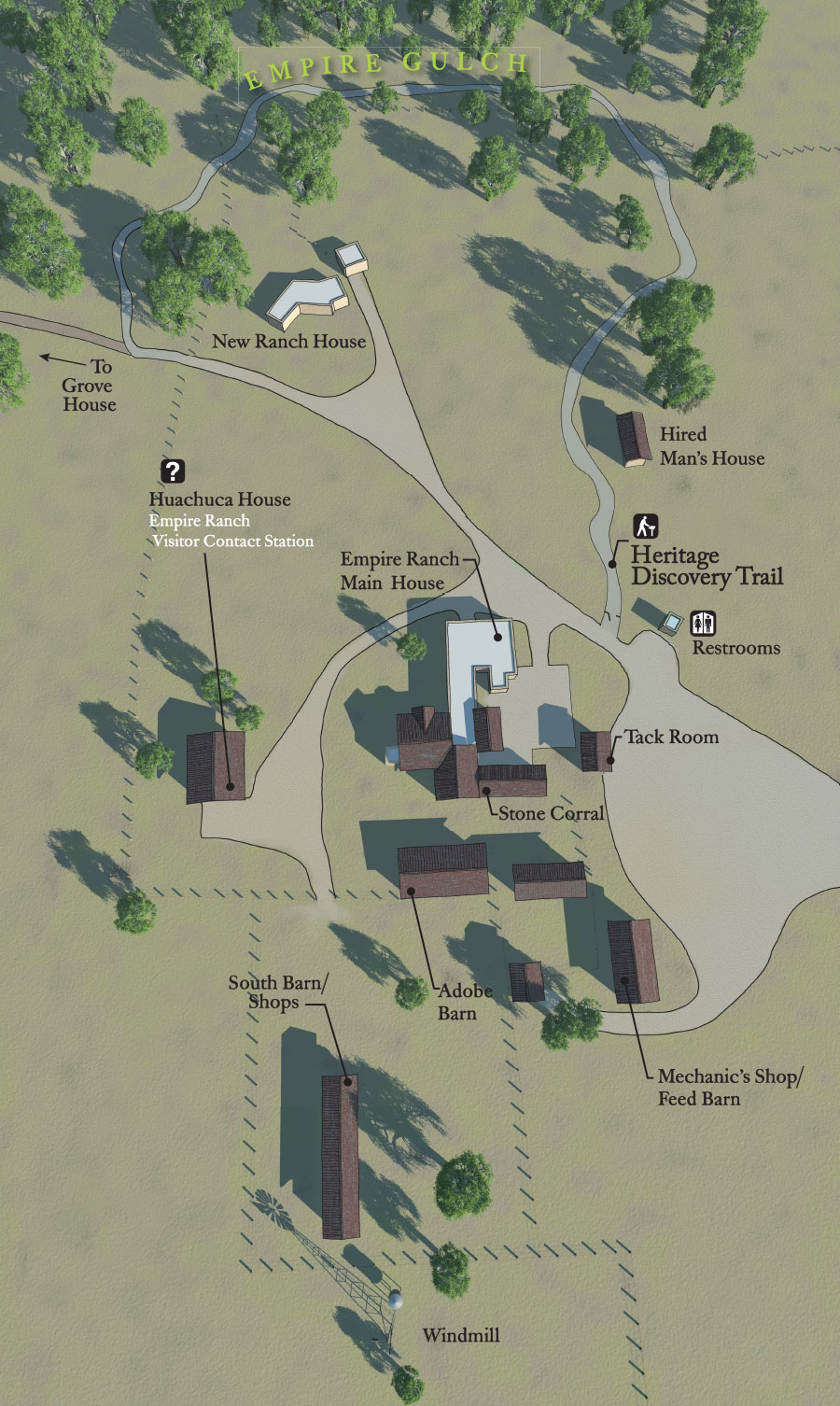 Empire Ranch House  The Empire Ranch House originated as a simple, flat roof four-room house (Rooms 1-4 and 6), constructed of hand cast adobe blocks between 1871 and 1874. Around 1878 a rear addition to the original Ranch House was added to provide room for staff and business offices (Rooms 9-18). Starting in 1878 the Victorian Addition for the family began to be constructed. It included six rooms constructed of adobe (Rooms 19-23, 29) and a Children’s Addition constructed of wood frame (Rooms 24-28). Place your cursor on the room number to learn more about the room’s use and function. To explore rooms of the Empire Ranch, click here.

Adobe Haybarn The ca. 1880 adobe barn is a large, two-story building, 61- feet by 28- feet. It has 12-foot walls on north and south elevations, and is over 20- feet tall at its west gable peak. The walls were constructed using 16-inch adobe blocks up to the level of roof bearing. Above that height, the gable portion is only eight inches thick. Evidence of two-by-six-foot joists spanning the bottom chord of the truss to the six-inch deep ledge at the west adobe wall suggests the presence of a partial hay-loft at one point along the west end. It is covered by a steep sloping roof with gable ends. This barn was used for horses.

Throughout the life of the barn, many alterations have taken place. An early twentieth century fire caused some damage (pre-1920 based on period photographs), and a new roof and roof framing structure were added. Internal adobe buttresses, which served as interior dividing walls, creating stalls, but also support for the exterior wall, were removed, as were at least two platform floors. The large door in south wall was added, as was another door in the east gable wall. Various doors and windows were filled, including the loft window over the new door, the large door on north side, and three windows on the east façade. At some point, the west wall collapsed and was rebuilt using rubble adobe. Diagonal tension bars were installed between the east, north, and south to control wall movement.

Interior and exterior bracing was erected in 2002-04 as part of emergency stabilization efforts, which included repairs to the structure’s foundation.  In 2015 the barn was stabilized by creating a steel framework to improve the stability of the roof and its attachment to the walls, and repairing and strengthening the foundations and the soils around them. While the steel framework is not invisible, the metal has been painted and wood stained to blend the new elements in with the existing material. Work on foundations and surrounding soils restored the soil level surrounding the barn to the height of the original grade and replacement of deteriorated adobes with cement-amended adobe bricks below and at grade, and with historic replicated adobes above grade.

Grove House This four-room, double-pile adobe house was built in multiple phases, likely beginning around 1870. Early photographs show a small rectangular adobe dwelling with a door on the west end of the north facade. This is likely the northeast room with chimney in the current house plan. The northwest room was likely added next. The three southern rooms to the rear were another addition, likely added at the same time as the porch and current stucco coating. A front gabled roof covered in corrugated metal was added at some point in time over the original flat earthen roof. The current roof covers all rooms under a single roofline. This building was used as a residence by the family of Pancho Boice until construction finished on the New Ranch House and by families working on the Empire such as Fred and Ruby Barnett (1940s).

Hired Man’s House This single-story, two-room, single-pile, rectangular plan, 40-feet by 14-feet, was constructed in the early 20th century from adobe bricks. The end-gabled roof is covered in corrugated metal. Mariano Ferra lived in the house starting in 1927, with his wife and granddaughter, Eva Ferra Jimenez. Eva recalled that others lived there before her grandparents. The house did not exist in ca. 1885 photographs, but it was there by 1920.

Huachuca House/Visitor Contact Station This small, stuccoed, front gabled house with standing seam metal roof was originally constructed on Fort Huachuca as officer housing. It was moved to the Empire Ranch as a home for Bob and Miriam Boice. At that time, the three-room addition with casement windows was added to the north side, doubling the size of the house. Construction was complete by 1950. In 2011 it was remodeled to serve as a Visitor Contact Station and to provide storage and office space for the Empire Ranch Foundation.

Mechanic’s Shop/Feed Barn This 23-foot by 51-foot, single-story, 12-foot high building with a front-gabled roof sheathed in corrugated tin, served as an equipment repair facility before 1928. After that time, this building served as storage for salt, bone meal, rolled barley for the horses in winter, cottonseed cake for weaned calves, stake truck, windmill tools, pipe, and firewood. The building is sided in corrugated metal on the exterior, and 12-inch horizontal planking on the interior to guard against rodent infestation of the grains. The building has a poured concrete foundation, as well as a poured concrete wall two feet above ground level on the north end that becomes ground-level at the south end, following the slope of the land. There is a 12x 10-foot sliding wooden door on the north end and a 7x 8-foot sliding wooden door on the east end. This east end door was likely added after initial construction of the building because the door opening had to be cut into the two-foot high poured concrete skirt at the base of the wall. A three-over-three light double window is in the center of the south gable (currently boarded up from the exterior), while a rectangular hole covered in wire is in the center of the north gable.

New Ranch House This single story asymmetrical “zig-zag” floor plan, block construction ranch house with low-pitched hipped roof covered in asphalt shingles was constructed circa 1954 for Pancho and Sherry Boice. The rectangular, two-story, block construction, two-car garage next to the New Ranch House has a low-pitched pyramidal roof covered in asphalt shingles was constructed circa 1954. The second story has five large casement windows and two side-lights on either side of the door and contains a storage area accessible via a short flight of stairs to a door on the west side.

South Barn/Shops This building was constructed by Banning Vail circa 1920 as a horse barn and for storage (north end) and blacksmith and repair shop (south end). The southern room has a second level, and a forge and anvil in the northeast corner. Soot stains from the forge smoke still color the walls. After 1928 the north end of this building was primarily used for equipment and vehicle storage. The room on the north end of the barn was enclosed to be used as a movie set for a filming at the ranch. The north room housed spare windmill parts and other tools. The room on the south end of the barn functioned as the shop. The Boice family poured the concrete floor, so as not to work in dirt. Portions of the vices and tool-racks remain on the interior.

Stone Corral Built ca. 1870, this 18-foot by 56-foot structure, projecting to the east at the southeast corner of the house, is open on the north and east sides, and has a stone wall on the south side. The stone wall has gate that swings outward to the south. The west end of corral abuts east wall of children’s addition. The gabled roof structure is made of partially peeled logs, and sheathed in corrugated iron sheeting, on one-by-three or one-by-six battens. Around 1915 this area was used to house the stallion. By 1928, this area was not used for horses; it was a woodshed, where firewood was cut and stored. The concrete block in the middle of the structure supported a pump engine that was used to cut wood.

Tack Room This is a 24×18-foot, single-story, frame building, with board and batten siding and a side gabled roof sheathed in corrugated metal. There are two sliding wood doors located on the east and west sides of the building, directly across from each other. The floor is poured concrete. Saddle racks occupy the north, east, and west walls. Constructed ca. 1900, the tack room or saddle shed was used primarily as a farrier’s shop through 1920, although some tack was kept there. From 1928 through 1960 it housed farrier tools, horseshoes, and rolled barley for the riding horses in the large bins along the south wall.

Wind Mill This 30-foot tall pyramidal structure with ten-foot square base was used to pump water. It no longer functions in this capacity. The current Aeromotor head was installed in 2009 from another location on the ranch after the original Dempster 12 windmill was damaged. Next to the wind mill is 15-foot tall cylindrical water tank constructed from welded five-foot by ten-foot lengths of sheet metal rests atop a ten foot tall metal stand with a hexagonal base composed of twelve-inch wide wooden planks. There is a water depth gauge on the east side of the tank. The tank stored the water pumped up from the windmill. The windmill and tank no longer pump and store water.